According to NASA, the moon travels 382,400 kilometers to orbit around the Earth.  It takes 29.53 days to complete one lunar cycle. Throughout its journey, the moon has eight different and recognized phases during the lunar period.

For more such curious science topics, also read our blog:-

The Big Bang Theory | Beginning of Everything

Now the question arises: what causes the moon to change its shape? We all know that the moon’s appearance changes with time, but why? The best way to understand the different phases of the moon is to examine a diagram of earth-moon-sun: 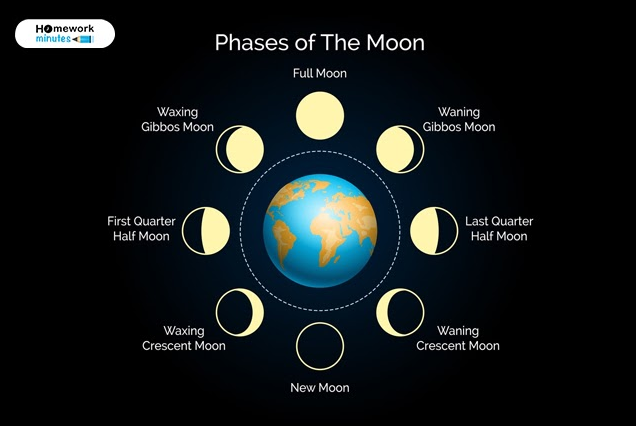 In the above picture, the sunlight is coming from the right. The Earth is in the center, and the different phases of the moon are revolving around the Earth. The dotted line shown here represents the viewpoint of the Earth. The large moon images outside show the cycle of the phases.

One important thing to notice is that the sun always illuminates the one half of the moon. Sometimes, we see both the sunlight portion and the shadowed portion, which creates different phases. The shaded part of the moon is always invisible to the naked eye. The diagram doesn’t show that the Earth is always facing the same side of the moon. The basic idea of the diagram and explanation is that the changing angles of the Earth, sun, and moon are the cause of lunar phases as the moon orbits the Earth.

The 8 Phases of the Moon

There are eight separate phases recognized during the lunar cycle. The main phases of the moon involve the new moon, the full moon, three waxing phases, and three waning phases. Every phase is different from each other and has a separate name and features.

The new moon is the first phase of the lunar cycle. It occurs at the moment when the sun and moon are parallel aligned to the Earth. In other words, the sun and Earth are on the opposite side of the moon. One can’t see the new moon from Earth since only the dark side of the moon faces the Earth. Sometimes, when the new moon is closer to the lunar nodes of its path, it can cause a solar eclipse. A solar eclipse occurs when the moon blocks the sun’s rays and creates the shadow on some parts of Earth. The most significant difference between high tide and low tide, i.e., spring tides, is that it takes place around the new moon and full moon.

When the thin silver layer of the moon becomes visible some days after the new moon, it is the beginning of the first intermediate phase and known as waxing crescent moon. In the past, people used to call this phase the new moon, and the darkest phase was the dark moon. But after doing much research on the phases of the moon, the concept of phases gets changed. The rest of the moon can sometimes be faintly visible because Earth also reflects the sunlight onto the moon known as earthshine. During the phase, the moon travels east in the sky.

When the moon has reached the first quarter of its orbit around the Earth, it is the second primary moon phase and known as the first quarter moon. During this phase, we can see 50% of the moon’s surface and also called half-moon. The least difference between high and low tide, also called neap tides, occurs around two-quarter moons. The name first quarter comes from the fact that at this phase, the lunar cycle gets ¼ completed. The moon is far away from the sun, and it’s easier to see during the phase.

Waxing Gibbous moon is the second intermediate phase and lasts until the next primary phase. The word waxing means that the moon is getting bigger, and the gibbous refers to its convex shape. The moon is larger than the semicircle shape of the moon in the first quarter but smaller than the full moon.

The full moon appears when the sun and moon are aligned parallel and opposite to each other. The alignment only lasts for a moment. The moon is behind the Earth. Occasionally, when the full moon passes Earth’s shadow, it causes a lunar eclipse. The moon is reddish in color during the lunar eclipse.  When the moon comes close to pointing to its orbit that is closest to Earth, known as a super moon. If the position is farthest to the Earth known as the micro moon. The full moon rises at the same time the sun is setting in the western sky.

It is the next intermediate phase of the moon. During this phase, the visible half of the moon illuminated decreases by time. The phase lasts until the moon is half illuminated. At this time, the cycle will be in reverse order of the first four phases.

It occurs when the opposite half of the moon gets illuminated compared to the first quarter moon. It shows that the ¾ of the lunar phase of the way completed. The third-quarter moon, also known as last quarter moon, begins to appear less and seems like the moon is shrinking as it approaches back to the new moon.

Less than half of the moon illuminates from the sun during this phase. Sometimes, the earthshine on the other part of the moon illustrates towards the end. The moon shrinks to the crescent that means less than half. It is the final phase of the lunar cycle. From this phase, the new moon phase marks the starting of the new cycle.